How Nigerians reacted to killing of police officers by soldiers

Many Nigerians on social media have reacted to the killings of three police officers by some officials of the Nigerian Army.

PREMIUM TIMES reported how three officers were killed and others injured after Nigerian soldiers opened fire on a police team in Taraba on Tuesday.

The incident occurred along Ibi-Jalingo Road, police said. The officers were of the Intelligence Response Team (IRT).

Felix Adolije, an assistant police superintendent, led the officers to the state to arrest a suspected kidnap kingpin whom the police identified as ‘Alhaji Hamisu. A civilian was also attacked while the suspect was freed.

The Nigerian Army on Wednesday said the police officers who were killed were mistaken for kidnappers by soldiers.

The army blamed a communication gap for the attack, which the police described as ‘bizarre.’

Although an investigative panel had been raised to investigate the incident, the police appeared uncomfortable with how the matter was being handled.

On Thursday evening, Frank Mba, police spokesman, condemned the army’s description of its personnel as suspected kidnappers and challenged the military to provide evidence of its claim that villagers made a distress call to soldiers.

The police also raised questions about the army’s stance using the hashtag #ProvideAnswersNigerianArmy.

The police also released the names of the officers that were fatally shot.

The police spokesperson named the officers as Mark Ediale, an inspector from Edo State; Usman Danzumi and Dahiru Musa, both sergeants from Taraba State.

Many Nigerians have since reacted to the incident with most expressing disbelief at both the killings and the official reactions.

@david_ohde said: “If the Nigerian police can be seeking justice through ashtag , cant u see thatvwe ordinary citizens are f**ked

@boluxxxx: “Our Nigerian Police has more faith in hashtag than reporting to Buhari.
Soon we go dey vote via Twitter. And remove Presidents via CAPSLOCK too.

Potter Gate: “The best way to get response and answers in Nigeria is through mass protest, but you have called it revolution. Since you are in charge of security, why don’t you try protest and see if the army will not shoot you with live bullets and tear gas. #ProvideAnswersNigerianArmy 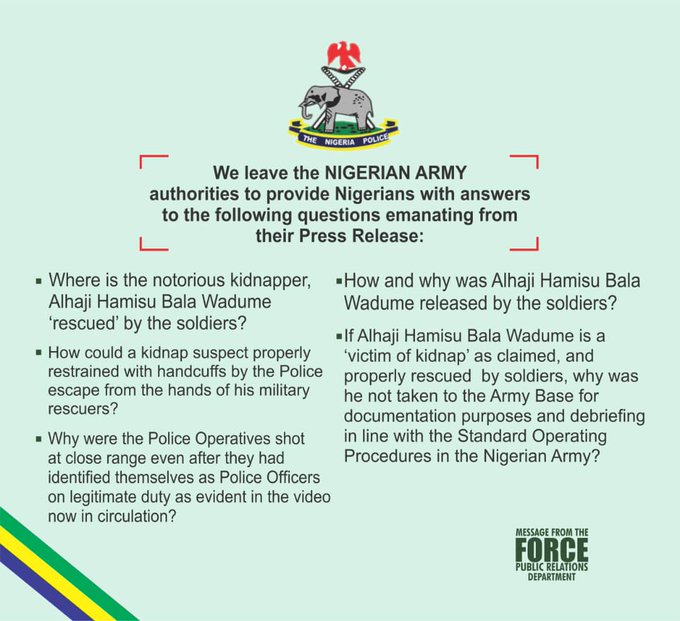 The best way to get response and answers in Nigeria is through mass protest, but you have called it revolution. Since you are in charge of security, why don’t you try protest and see if the army will not shoot you with live bullets and tear gas. #ProvideAnswersNigerianArmy

50 people are talking about this

“The Nigerian army likes playing us for fools.
Those soldiers were prolly on the payroll plain and simple.
That’s probably why
@PoliceNG
did not tell them about the operation.”

“The impunity will go round.
Nigerians must have sense by force.
#ProvideAnswersNigerianArmy

@Ogagazino: “What is unfolding is a sign that our security forces are somehow culpable in all the kidnappings and banditry we face in this country, a major reason they have been unable to curb the insecurity challenges. #ProvideAnswersNigerianArmy

“I am from a country where the Police force creates a hashtag to get answers from the Army on a very embarrassing and fatal incident. It’s hard to be surprised by anything these days, but this is beyond ridiculous. Anyway, #ProvideAnswersNigerianArmy

@abdulrahman: “What I don’t understand is how the corruption we have been fighting will make Army Officials kill Police Officers and rescue a “captured” kidnapper.
Is there hope for security in Nigeria with the rate of poverty and illegal money in circulation?

@theboyisgreat: “Days ago , the @PoliceNG & @HQNigerianArmy joined forces together to harass , molest and intimidate unarmed protesters..
Look at them today washing thier inefficiency & irresponsibility outside..
How do these kind of people want to fight insecurity?

@yaseelkugu: “The Nigerian army said, they mistaken policemen for kidnappers. There is no better ridiculous and unscrupulous defense to the killing of the three policemen than this one.
#ProvideAnswersNigerianArmy

“Kidnapping has rampaged this country for sometime now. How many real kidnappers did army arrest or kill recently. They are so mischievous to say they mistake police who showed their ID as kidnappers”